Bread pudding has always been a favorite of mine. Petit Oven makes the most amazing bread pudding I’ve ever tasted. Warm and spongy, swimming in a pool of salted caramel sauce. I sometimes joke, just give me a bowl of caramel! Their dessert menu is small, usually the bread pudding and one other item, though with to items of near perfection, what else would you want. I always consider bread pudding as an option to bring to family meals, but it’s not really an option. On one side, I have bread pudding haters (I know, I don’t really understand either), and on the other side I have gluten-free eaters. Considering I’ve never made one regular bread pudding, I was not about to start with a gluten-free version. And considering a recipe requires a full loaf of Italian bread, it’s not something my husband and I alone should eat. So it’s true. I’ve never had the opportunity to make a bread pudding. Until a few weekends ago.

When Suzanne from A Pug in the Kitchen invited me to one of her foodie potlucks, I was excited and anxious all at the same time. A gathering of bloggers and cooks, brought together through Food52, how could I refuse? I accepted the gracious invitation before even considering what I was getting myself into. It was only in the weeks that followed, where I agonized over what to bring and semi regretted my response. What do you cook for foodies? My husband will eat anything I put in front of him. My family is always gracious and though might have some constructive feedback, they rarely leave unsatisfied without cleaning their plates (sometimes licking, in my mom’s case). But that’s family. This was a gathering of people I’d never met, besides our blog comments back and forth, whose food always looked a thousand times better than anything I’d post (they have mastered the skill of food photography).

In typical procrastination, I decided to bring an entrée and dessert just two days before the event. I’ve never known anyone to turn down pulled pork unless there’s an allergy involved. It was something I could make without much fuss and be proud of, giving me the opportunity to take some risk with the dessert. I was fixated on bread pudding. And if it didn’t work out (as it finished 15 minutes before I needed to head out to the party), I could simply go with the one dish.

A friend assured me bread pudding was easy. A simple “dump” recipe she called it as it was more a matter of making the custard base, mixing the bread and dumping everything into a dish before baking. I researched a bunch of recipes, finally settling on a recipe from Two Peas and Their Pod, a trusted blog, and loosely adapted the recipe. I added apricots to celebrate the season, a bit of bourbon and swapped a traditional Creme Anglaise for a more almond flavored sauce.

I was content with the dessert on day 1 but in love after having some leftovers on day 2. The flavors of the apricot, raisins and custard do well to sit together and mingle for some time. Next time I would certainly make the recipe a day ahead and warm it when ready to serve. My new foodie friends seemed satisfied. It’s far from the best dessert I’ve ever made, but a pretty good shot at my first bread pudding.

FOR THE BREAD PUDDING:

n a small bowl, mix apricots, 1/4 c sugar, cardamom and ginger. Allow fruit to macerate at room temperature for 1 hour. Pour fruit and syrup into a small saucepan, add bourbon and bring to a boil. Reduce to a simmer and cook until liquid is syrupy, about 5 minutes.

Meanwhile, in a large bowl ( actually used the stoneware from my dutch oven) whisk eggs, remaining 1/2 cup sugar, milk, and vanilla seeds until smooth. Add bread cubes and toss well so bread is fully coated with custard mixture. Let sit for 10 minutes so bread can soak up as much liquid as possible. Stir in raisins. 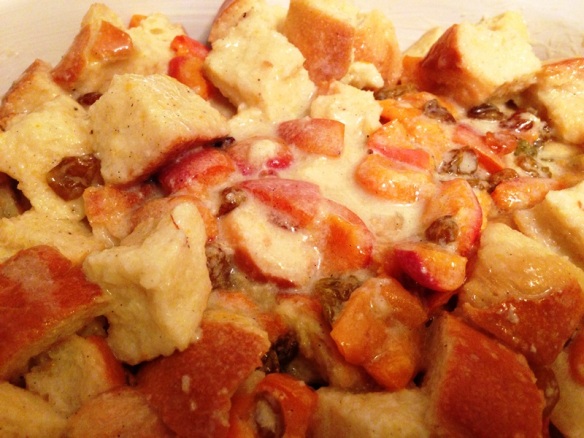 Preheat oven to 350°F. Generously brush a 2 1/2 or 3 quart baking dish with 1 tablespoon of butter. Add soaked bread cubes and drizzle with remaining 2 tablespoons of butter. Bake for 50 minutes until pudding is slightly browns and separates from the side of the pan and custard is set. Cool and refrigerate overnight. 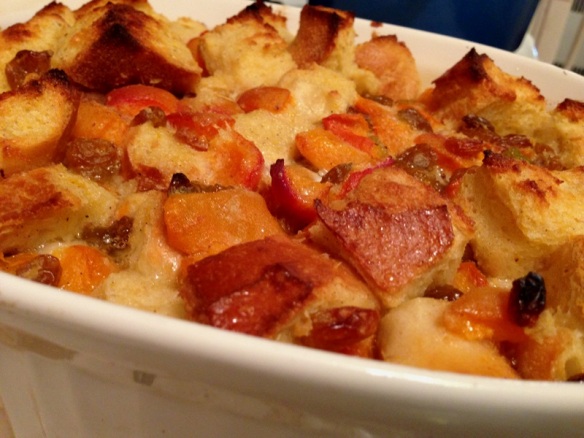 While the pudding is baking, make the custard. Heat milk and cream in a medium saucepan over moderate heat and slowly bring to a boil. Remove from heat and stir in vanilla seeds. In a medium bowl, whisk egg yolks and sugar together until pale yellow. Temper the egg yolks by adding the cream mixture a few tablespoons at a time, whisking constantly, until you’ve added about half the cream. Be sure not to add the mixture too quickly or the yolks will scramble! Pour the egg mixture back into the pot with remaining cream mixture and cook over medium-low heat with a wooden spoon until custard thickens enough to coat the back of the spoon.  Remove from heat and stir in almond extract. Strain custard through a fine mesh sieve into a heat-proof bowl. Cover with plastic wrap (placing directly on custard’s surface) and chill in the refrigerator.

When ready to serve, cut a piece of bread pudding and warm in the microwave for about 2 minutes at 50% power.  Top with custard and serve immediately.