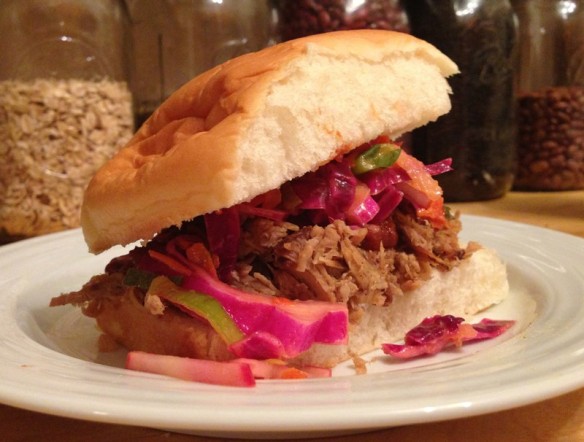 I’m not sure I fully understood and appreciated real barbeque until I moved to Brooklyn. Growing up, I thought of barbeque more as a cook out. Friends and family would come over, and we’d grill hotdogs and hamburgers, maybe some steaks if we were being really fancy. I knew of pulled pork and ribs and brisket, and sure I had them a few times, but never really craved them. My first real barbeque joint in Brooklyn was Fette Sau. If you’ve never been, you are truly missing out. Don’t expect fancy. Fette Sau in Williamsburg is a renovated garage that dishes out trays of the most delicious smoked, braised meats you could imagine. Dining is communal, picnic tables inside and out stacked with rolls of paper towels. On a Friday or Saturday night you can spot the place from the huge line that forms outside. Meat is ordered by the pound, slapped on a tray and served with as many slider buns as you can handle. Line two offers local craft beers served in mason jars, of if you have a crowd, by the gallon. Yes it’s a bit gritty but that’s what barbeque should be.

Since my first visit to Fette Sau, I’ve experienced much of Brooklyn’s barbeque scene. The Smoke Joint in Forte Greene is a very close second and even Bay Ridge is moving up the ranks with Uncle Jimmy’s. But sometimes you’re not in the mood for dining out or take out. I’ve experimented with barbeque at home, with my limited resources. Obviously a smoker is out of the question, though I wonder if there are any official laws banning them in apartments. I’m sure someone, somewhere has tried. And in the summer, the last think I want to do is raise my kitchen temperature to over 200°F for 4-5 hours as the meat cooks. So I’ve found solace in my crockpot. I’m not yet sure about ribs, but so far I’ve had great success with BBQ brisket and chicken wings (recipe coming soon) and just this past weekend–pulled pork.

The secret to great pork is a great rub. I piled on spices, rubbed the meat and set it to chill overnight so the flavors would really seep in. A quick sear in the morning (smoke detectors disabled) then a leisurely cook in the crockpot all day long. Shred it, add some barbeque sauce and of course a kick ass slaw. I think it’s the slaw that really makes a great slider. The whole combination of a soft roll, juicy pork, smokey sauce and crunchy slaw really pulls it all together. 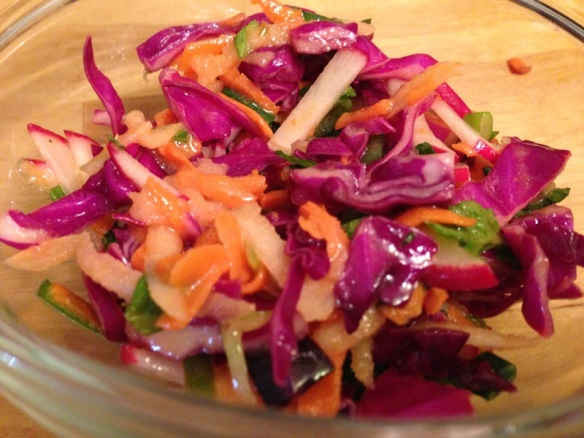 My slaw of choice was filled with red cabbage, radishes, apples and carrots and brought together with a dressing of cider vinegar, honey, oil and just a touch of mayo. Even the slaw on its own, as a light salad is pretty delicious! Sadly, I can take no credit for this fantastic creation. It is all thanks to one of my favorite Australian blogger, Laura’s Mess. I one-and-a-halfed the recipe to assure I had plenty for the 5 pounds of pulled pork I made plus had to substitute cider vinegar and honey separately for the Wescobee she spoke of (cider vinegar and honey in one product? Never seen it but want!). I can assure you that while the pulled pork is good, the slaw brings it to the level of major awesomeness.

Mix all spices, brown sugar through cayenne pepper in a small bowl. Rub pork generously with spice rub (you want to use all of it!). Set in a small ceramic crock or roasting pan, cover with plastic wrap and refrigerate overnight or for at least 8 hours.

In a large dutch oven heat canola oil until very hot. Pat pork dry, being careful not to remove too much of the rub, add to dutch oven and sear all sides until charred and deep brown-black, about 5 minutes per side. Meanwhile whisk together vinegar, water and tomato paste with any remaining marinade juices. Transfer pork to crockpot and pour over marinade mixture. Cook for 10 hours on low. 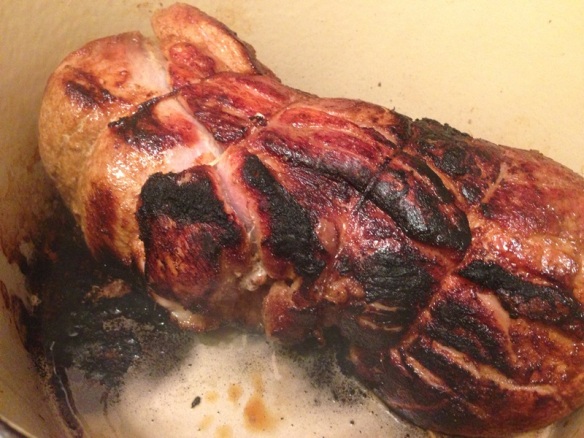 Remove pork from crockpot and shred on a cutting board using two large forks. Skim any fat from the liquid in the crockpot before returning shredded pork. Mix well so meat is fully saturated. Pork can be served immediately or refrigerated until ready to serve. Personally, I prefer letting it chill and marinate for another day to really seal in the flavors. When ready to enjoy, heat pork in a appropriate sized pot over low heat until warmed through. Add addition water if necessary.

To serve, spoon a generous pile of pork onto slider role, top with about 1 tablespoon of barbeque sauce and generous spoonful of slaw. Enjoy with plenty of napkins (or a roll of paper towels) nearby.