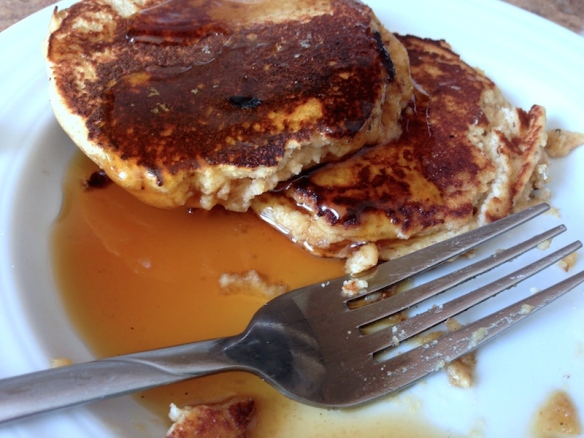 For this month’s Secret Recipe Club I was paired with Stephanie from Dessert Before Dinner. I find a bit cruel to be assigned to two sweet blogs (last week it was Annie’s Noms) just before and in the middle of my first Whole30. A true test of strength indeed! But none the less, as soon as I could again eat real foods, I couldn’t wait to indulge with one of Stephanie’s recipes.

After eating eggs for breakfast for a month, I was immediately drawn to her Coconut Flour Pancakes. This recipe is ridiculously easy and makes a generous portion for one, or two smaller portions if you’re willing to share. Pancakes have always been a weekend indulgence for me. They take time to make, require me getting out the griddle–a lot of effort all around. But these. These pancakes are just brilliant. Quick to mix, easy to cook in a cast iron pan, hard to not devour in 5 minutes. 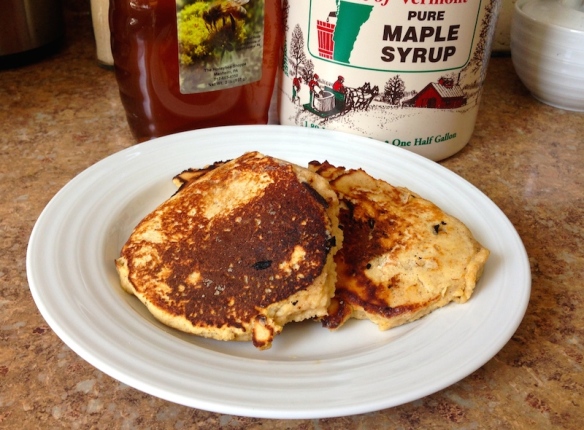 In a small bowl, whisk together eggs, milk, cinnamon, nutmeg, cloves and honey until well blended. Whisk in coconut flour to combine.

Heat butter over medium heat on a large skillet or cast iron pan until melted and foaming. Drop pancakes onto skillet, flattening out the batter as much as possibly (otherwise the insides won’t cook!). Flip after 2-3 minutes when pancakes start bubbling. Cook an additional 2-3 minutes on the second side. Serve with pure maple syrup.

10 thoughts on “SRC: Gluten-Free Coconut Pancakes for One”