I was probably about 6 the first time I encountered mulberries. We pulled into the parking lot of our town’s fitness center for my weekly swimming lesson. We had an outdoor pool but I was too delicate to be plunged into the icy cold water. A warm, over chlorinated pool was the only way I’d learn to swim. As my mom negotiated a parking space, I peered out the window at two middle-aged Spanish women standing on ladders in the middle of the lot. The ground below them was stained bright purple and they stretched  to pick berries off the tree above, barely out of their reach. They had buckets filled to the brim with deep purple berries and occasionally would pop one into their mouths. I remember asking my mother what they were doing, but I don’t recall much of the conversation as we scurried into the building, late as usual. But that scene still plays vividly in my mind today and it was then I realized that there were plants you could eat not grown in a traditional farm or garden.

A few years later, we moved to a new town and my new school had the same kind of tree. It was bit shorter and easy enough for an 8-year-old to climb and collect berries without help of a ladder, but certainly the same thing. I learned it was a mulberry tree with edible berries, a bit like blackberries but milder and more green tasting. We would occasionally snack on them after school, waiting for our parents to pick us up. It is a taste I sometimes have trouble describing but one that I can recognize anywhere.

When we moved to Brooklyn, I immediately recognized the mulberry tree just a few houses down. The branches were a bit high and I wasn’t nearly as brave to prop a ladder in the middle of the street. So I looked at them longingly, every June as the sidewalk turned purple and the birds had their feast. When I started canning, I yearned to make mulberry jam. This year I found the courage. If there was a tree on my block there had to be others in Brooklyn and hopefully at easier picking levels. I searched the internet for any mention of the trees. I discovered two promising spots–Gateway Triangle in Clinton Hill and South Portland right by Fort Greene Park. Containers in hand I was set. 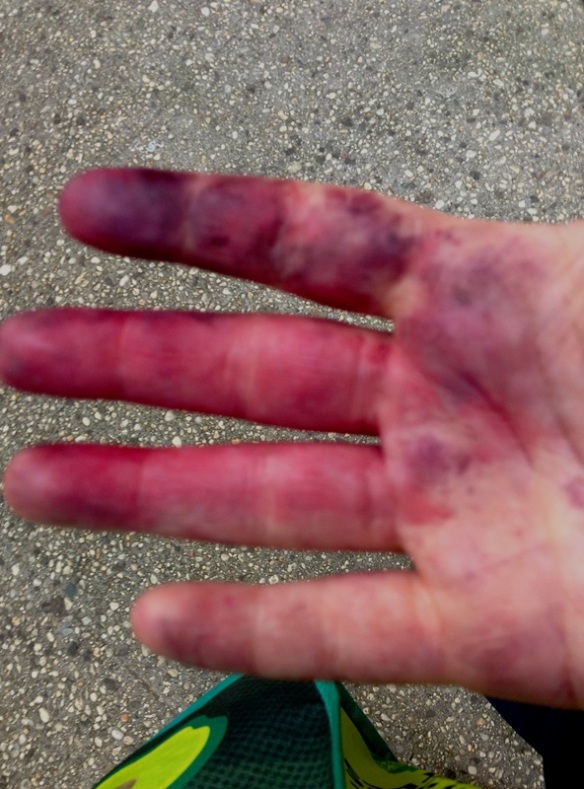 Don’t worry, it goes away in a day…or two

The reaction to my urban foraging was drastically different in each neighborhood. At Gateway Triangle I was on a major street, right next to a bus stop. As I pulled the berries down, they’d stain my hands and splatter against my skin, coloring me purple as they did the sidewalk (note to self–wear dark-colored long sleeves next time!). I can’t imagine what I looked like, stretching for the branches just out of my reach. Some stepped around me, eying me suspiciously, some ignored me and those with children seemed to pull them just a little bit closer. In Fort Greene, being near the edge of the park, I got more curiosity than fear. Some stopped to talk, some were familiar with mulberries, others fascinated and one extremely tall teenager offered to help (if only he had showed up sometime before I was picking my last berry). Walking home, speckled purple with hands of a leper, I laughed to myself realizing I’ve  become the crazy lady that harvests from her neighbors’ yards. And I’m only 30–just imagine what 60 will look like…

In a medium saucepan heat berries, lemon juice and 1/2 c sugar over medium heat. Slowly bring berries to a boil, crushing slightly with the back of a wooden spoon as you go to release their juices. Meanwhile, in a small jar stir together remaining sugar and pectin. Stir into boiling fruit, making sure pectin has completely dissolved. Reduce heat and let simmer until it thickens slightly, about 10 minutes. Ladle into hot, sterile half-pint or 40z jars leaving 1/4-inch headspace. Process in a boiling water bath for 10 minutes.