This month I was assigned to Fried Ice and Donut Holes, a blog that I discovered last month when I was first invited to join the Secret Recipe Club. Secretly I was hoping it was a blog I’d be assigned in the near future. Why? Well, first off, the fabulous author of Fried Ice and Donut Holes is Melissa as well. So instantly I knew I’d like her.  With all Melissa’s I find good food and creativity always follow and this was no exception. So many great recipes to choose from! Right away, I zeroed in on her Chicken Tikka Masala recipe, a dish that I’ve struggled with a lot in the past. At this point I’ve probably made at least half a dozen variations from super easy to super challenging, from stove top to crockpot, but nothing has tasted just right. My husband had been ignoring my craving for Indian take out for the last few weeks, so I figured if I made it, he would be forced to enjoy.

There was still something lacking, mostly in the spice, though it was probably one of the closest interpretations a Polish girl can hope for with an Indian recipe. I do plan to play a bit more. My favorite part of the recipe was the marinade. Chicken smothered with yogurt and spices sat in the refrigerator for an hour, or in my case closer to 4 hours. After broiling it, the chicken still remained super tender, to the point that when cutting it seemed more shredded than cube-like. The major edits would probably come in the cooking time. Marinate overnight so creaminess of the yogurt and combination of spices could really permeate the meat. And perhaps use a bit more tomato sauce and stew everything for a few hours rather than the 30 or so minute cook time.

Another thing I’ve recently discovered is how much rice makes a difference. We don’t eat a lot of rice around here, but when we do it’s either in the form or risotto or brown rice. I can’t even tell you the last time I bought white rice. Or white pasta for that matter. I love my carbs and could never part with them, but try to keep them as whole grain as possible. Chicken Tikka Masala over brown rice simply doesn’t work. I found using jasmine rice was a perfect complement and far easier to cook than expected. A bit of white rice every few months never hurt anyone.

My biggest regret was that during the whole process I completely forgot to try out Melissa’s homemade naan recipe. The prepared dough is formed into flat, elongated disk shapes, brushed with butter and basically pan-fried in a cast iron or heavy-bottomed pan until brown and a bit bubbly. I was ready to start my naan while my chicken simmered in tomatoes, completely missing the “at least 2 hour” rising stage.  Even with the recipe turning out as well as it did, paired with light, fluffy jasmine rice, the meal still felt a bit incomplete without pieces of naan to tear up and soak up the remaining sauce. Next time.

In a small bowl, combine yogurt, lemon juice and all spices. Place chicken in a small baking dish and pour over sauce, making sure it’s completely covered including underside. Cover with plastic wrap or lid and refrigerate for at least 3 hours or preferably overnight.

Cover a baking sheet with aluminum foil. Remove chicken from marinade, shaking off any excess and place on baking sheet (curl up the edges of the foil so marinade and juices don’t spill over). Broil for about 10 minutes on each side until slightly charred (it’s okay of the chicken isn’t completely cooked through, it will continue to cook in the sauce). Chop into bite-sized cubes and set aside.

Meanwhile melt butter in a medium dutch oven. Saute garlic and onion until garlic is fragrant and onion is slightly translucent, about 5 minutes. Season with cumin, paprika and salt. Stir in chopped tomatoes and tomato sauce and bring to a boil. 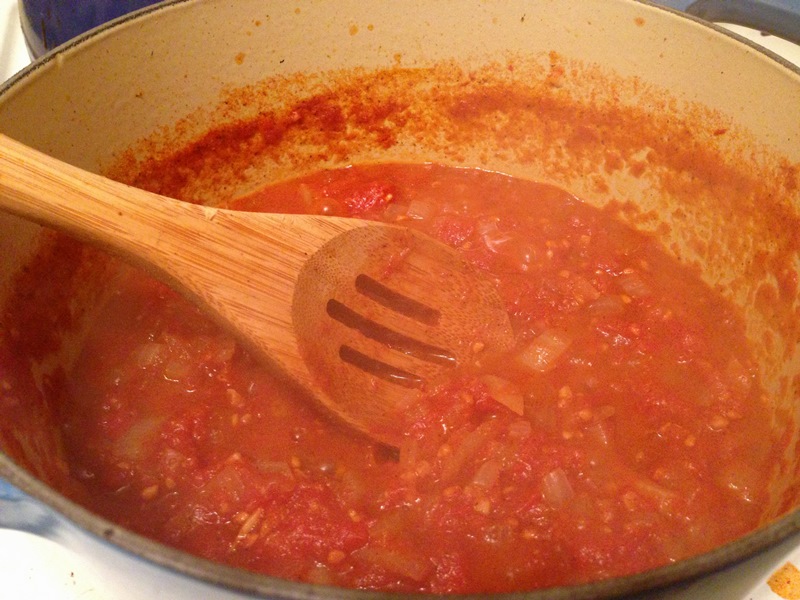 Stir in cream until fully combined, add chicken, reduce heat and simmer, covered, for about 30 minutes. 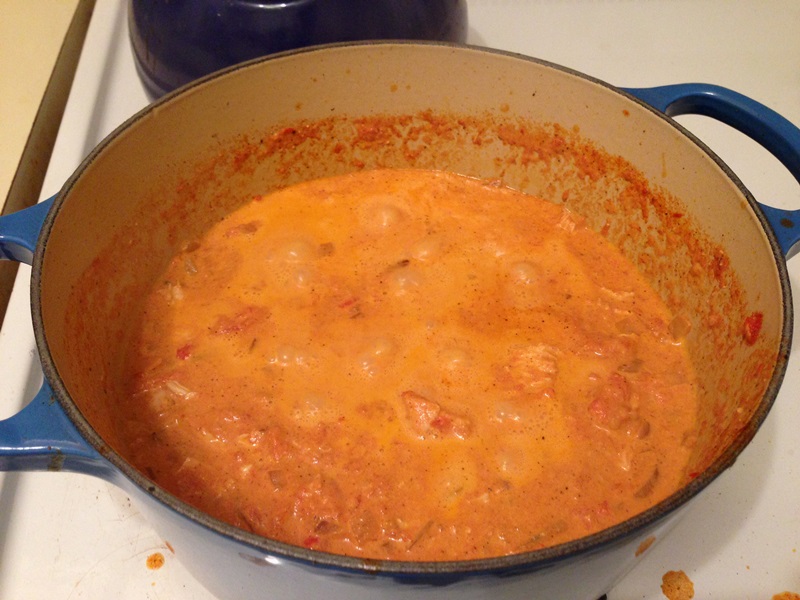 Partially uncover dish and continue to simmer until sauce has slightly reduced and thickened, about 10-15 minutes longer. Serve over rice and along side naan.