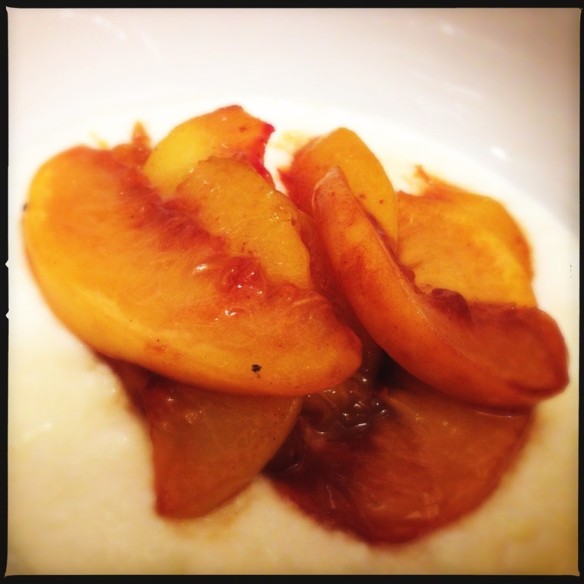 If you look hard enough there are still just a few peaches left. I almost overlooked them at the Fort Greene Farmer’s Market last week, mistaken them for another variety of apples among the already half a dozen or so other bins. Between canning, crisping and just straight out eating, I feel like I’ve gotten my fill of peaches for the summer. But when the last of a harvest is about to leave you for almost a full year, somehow you find the need to buy just a few more.

As I’ve found with many peaches this summer, the flavor just isn’t there. Blame it on the wet June or the heat wave in early summer, or both. I’m not sure what the cause is but a lot of produce just doesn’t seem to compare to last season. Corn, tomatoes and peaches in particular. I’ve probably only consumed two or three peaches plain this year. The rest have been put up or cooked with something to draw out their sweet flavors. These peaches were no exception. In the effort to simplify my cooking I decided to play with a classic bananas foster recipe, just switching out the bananas for peaches. Let’s just say peaches with rum and a bit of fire go nicely together.

In a large non-stick frying pan, melt butter over medium heat and allow to brown slightly. Add peaches and sprinkle with sugar, cinnamon and salt. When sugar has melted, pour over rum. Swirl dish so rum evenly covers all fruit.

Strike a match and toss it into the pan (be careful!). The pan should ignite. Remove pan from heat and continue cooking until fire has extinguished itself. Spoon peaches and sauce over vanilla ice cream (for dessert) or plain yogurt (for a boozy breakfast).