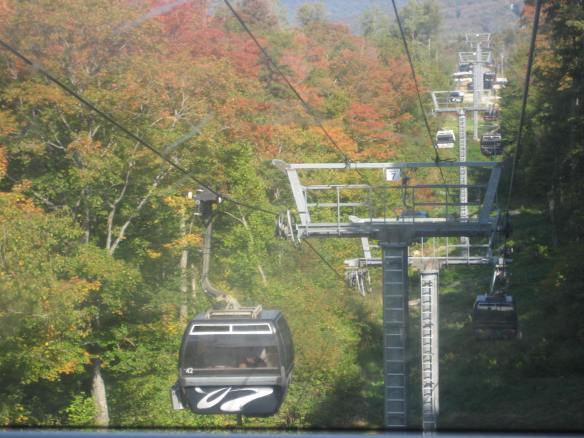 Nothing like escaping the city to find the real Fall. Leaf peeping, hearty cider, pumpkin spice and maple syrup. I spend last weekend in Killington, VT with my husband and his family. We tried to enjoy the foliage, taking a gondola ride to the top of Killington Mountain, but having such little time, I felt the trip became a whirlwind of eating and drinking. Not necessarily a bad thing.

Vermont is know for their dairy, creameries and cheese. Add that to locally raised meats, fresh produce and great beer, and you have yourself a pretty great state. Here are some of my favorites.

First off, the restaurant is in a town called Queechee. How cute is that? That alone was enough to piqued my interest. Their food is fresh, seasonal and inspired by its surroundings. Pumpkin maple soup, mixed greens tossed with crumbled Vermont cheese and classic Shepard’s pie featuring locally raised beef. I especially loved their extensive draft list (for a restaurant) that included only Vermont beers (and Guinness). Did I mention they are also a huge hand blown glass shop and you can watch the craft right downstairs?

It was dark and rainy when we arrived for dinner, so I can’t comment much on the exterior but inside, it was like a small country inn. Except small in the sense that it could seat 60 people. Their menu was moderately sized, about a dozen choices for entrees and appetizers, but I still had trouble narrowing it down to just a single dish. Luckily, my husband (involuntarily) shared his meal so I got to try double. I ended up with a beautiful heirloom tomato and grilled eggplant salad, pomegranate glazed duck breast and earl grey tea creme brulee. My only regret was how full I felt at the end of the night because I felt compelled to pretty much scrape my plates.

Originally a Boston brewery, Harpoon later opened its Windsor, VT location in 2000. If you have a few hours in Vermont, this is the place to be. Great bar, great food and if the weather is nice, you can hang out around the fire pit outside to keep you warm on a crisp fall afternoon. I didn’t have a single favorite but was impressed how many beers they had on tap besides the usual IPA that I see in NY all the time. PS…beer in Vermont is SO much cheaper than in NY. Jealous.

How can you visit Vermont without stopping at a cheese company? This place was the mother of all cheese stores. The store sells their own cheeses plus other Vermont cheeses and specialty products. And not only can you buy the cheeses, but you can TASTE them too. I must have sampled 4-5 out of the several dozen offered to me. My favorite? Their alehouse cheddar made with beer from Harpoon Brewery right next door.

6 thoughts on “My Weekend in Vermont”