I’ve noticed a trend lately of risotto like dishes that skip the traditional main ingredient of Arborio rice. In restaurants I’ve seen creamy orzo cooked down with greens. The blogs and Pinterest fill with barley or quinoa options. In my eyes risotto is a creamy rice dish, slowly simmered with broth and/or wine, onions and other veggies. But really, why does it have to be rice? I’m sure there’s history to the meal, and many of my Italian friends might be jumping through their computer screen, ready to strangle me. How dare I even for a moment consider altering the perfectly classic dish? How could I possibly make it better? I never claimed better, just different. Food is meant to evolve, to be played with. So today, I’m playing with risotto.

Ironically, what I love most about risotto is its creaminess, something I would instantly say goodbye to with the substitution of quinoa. However, as much as I’m drawn the buttery flavor of a risotto, I also crave texture. I eat my banana’s firm, almost green when there’s still a bit to bite into. Once they turn yellow, they’re practically too ripe. I prefer rye bread with seeds. I’m not saying I’m all about crunch but a little bit goes a long way. The first time I had quinoa, cooked with kale and bacon, I loved not just the saltiness the bacon brought but the crunch of the quinoa itself. Thus in my risotto attempt, I was curious to see if gently simmering the quinoa for close to half an hour would result in a creamy dish with still a bit of crunch.

This dish was also an excuse to cook with ramps for the first time. When ramps hit the greenmarket, you know. Everyone and their mother is crying out with delight. Spring is here! Ramps are here! I never really got it. Ramps are called many things–spring onions, wild garlic, wild leeks. To me, they’re just a bit confused. Garlicky scented with a strong onion flavor. If I wanted garlic, I’d go for garlic scapes. If I wanted onions, I’d go for leeks. It’s like a hybrid vegetable that can’t make up its mind. But when I found myself at the market, I caught eye of a bunch. The delicate stalks called to me, and I knew it was time to put them to the test. Because really, what kind of locavore would I be to never have cooked with ramps?

I chose to cook the risotto with just bacon at first, adding the mushrooms and ramps at a later stage to retain their intensity. Though cooked in the risotto style, this substitution of quinoa certainly wouldn’t fool your elite risotto connoisseur. However, I found it a nice alternative to the standard starchy dish. Bright with flavor and a little crunch. And maybe most importantly, it helped me understand the fuss about ramps.

In a medium saucepan, bring the broth to a simmer and keep warm. Heat a small dutch oven over medium heat. Add bacon and let crisp slightly. When the bacon has released some of its grease, add the onion and cook until softened, 3-4 minutes. Add quinoa and sauté for one minute to “toast” before adding wine. Bring to a boil, then add enough broth to cover the quinoa. Reduce heat, cover and simmer, stirring occasionally and adding broth as needed  (just over 2 cups total), until quinoa is tender, about 20 minutes.

Uncover dutch oven and add mushrooms, ramps, and rest of broth. Cook until mushrooms are tender and broth is dissolved, 5-10 minutes. Stir in Parmesan cheese and season with salt and pepper. 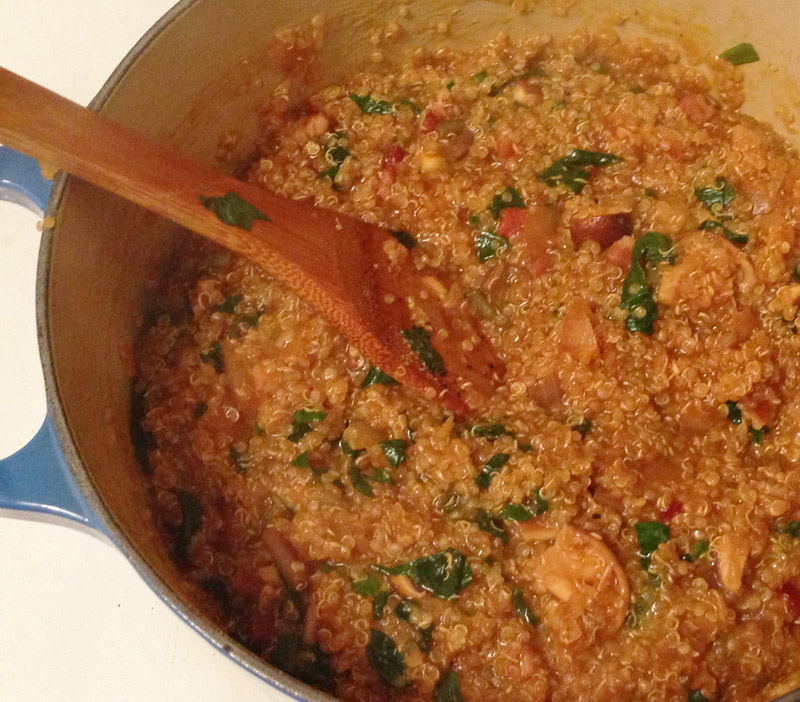