A few weeks ago I shared the announcement of Bensonhurst’s Greenmarket opening, but last weekend I finally had an opportunity to check it out. The market opened in early July, so I made it to their third weekend.

First, you have to appreciate the location. Milestone Park on 18th Avenue between 81st and 82nd Streets is a perfect little community park. Shop the market in the tree shaded square while people play chess and mahjong all around you. It’s a beautiful community center. In Bay Ridge, the Greenmarket takes up half of Walgreen’s parking lot on a Saturday morning and while the market space is big enough and well blocked off, I always feel like I’m going to get hit by a car walking there.

Then the selection. Pretty much anything you need is there: bread, baked goods and pastries from Francesca’s Bakery, amazingly sour and spicy pickled treats and chutneys from Divine Brine and an ample selection of produce from Kernan and Rexcroft farms (where I also spotted the wonderfully intriguing Romanesca). The only thing missing was meat and fish. According to GrowNYC’s market listing, American Seafood should be there weekly with wild caught fish and shellfish from Suffolk County, but I missed them last week.

Now the biggest lesson I’ve learned from shopping at the Greenmarkets is farmers will only come if they can make money. These farmers are traveling FAR, sometimes up to 4-5 hours each way, just to sell their produce. So the trip needs to be profitable for them. If people don’t shop, farmers don’t make any money which often causes them to leave. I witnessed this in Bay Ridge. We started out with so many different farmers–meat, cheese, honey, eggs–but little by little they disappeared. People weren’t shopping enough and the trip wasn’t worth it.

So support the Bensonhurst Greenmarket (Sundays 9am – 4pm!) and other Greenmarkets in your area! There is nothing better than a piece of fruit or vegetables eaten in peak season! New York is spoiled by its wide network of Greenmarkets. But if we don’t shop, the farmers won’t come.

Pickles anyone? From Divine Brine 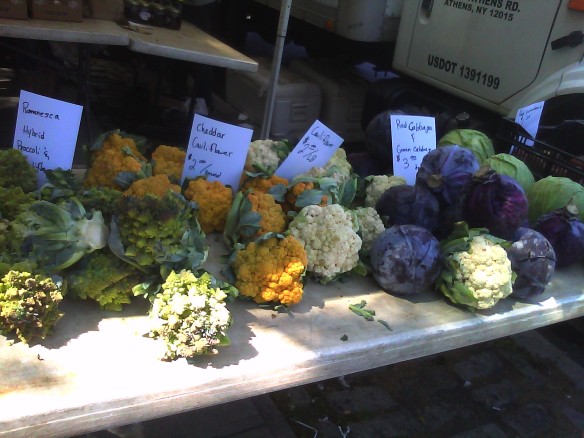 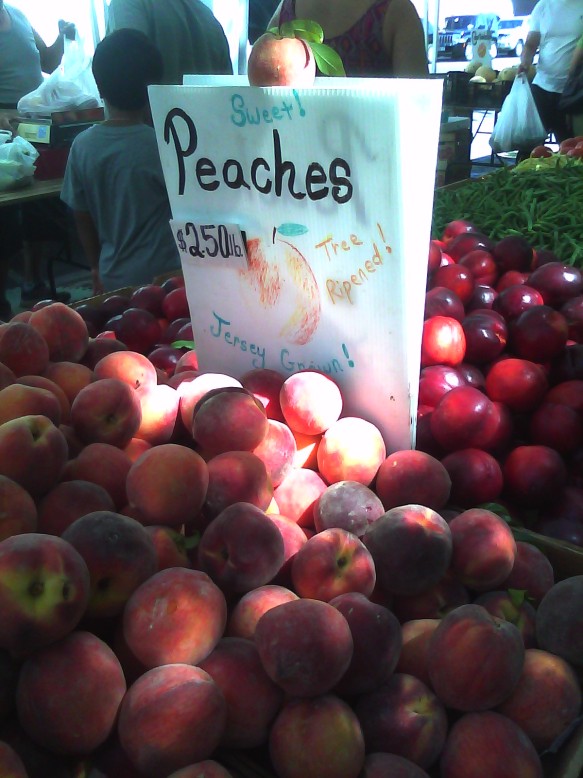 Is it cauliflower? Or is it broccoli? How about a combination of both! Romanesca is a hybrid of both. My husband thinks it looks like something grown “under the clouds of Venus.” Personally, I think it looks like something you’d find while snorkeling in some exotic sea. I’m thinking steamed then quick saute with garlic and olive oil.

Spotted this afternoon at the Rexcroft Farm stand (Athens, NY) at the Bensonhurst Greenmarket.

South Brooklyn is slowly catching up to the rest of the borough when it comes to farm fresh goods. First was the Bay Ridge Greenmarket every Saturday during the summer at 95th and 3rd Avenue, now GrowNYC has announced the grand opening of the long awaited Bensonhurst Greenmarket!

The market opens next Sunday, July 8 and will be open every Sunday after from 9am-4pm until November 18. The market will be located in Milestone Park on 18th Avenue between 81st and 82nd Streets.The Bensonhurst Greenmarket farmer list has not officially been released, but the market plans to carry local seafood, farm fresh fruits and  The offerings will range from vegetables, fruits, plants and flowers to fresh fish and baked goods. As with all of GrowNYC’s markets, be sure to stop by for cooking demos, raffles and family-friendly activities all season long.