Lately I’ve been obsessed with tacos. Going gluten-free has been pretty easy at home, but dining out is a bit of a challenge. No short ribs because they’re dusted in flour before searing; sushi is a bit complicated unless you bring your own tamari (gluten-free soy sauce); and watching people gobble down a giant bowl of pasta is just not fun. So I’ve latched onto Mexican cuisine. It was already one of my favorite cuisines, but knowing it’s pretty much all naturally gluten-free, so long as the tortilla shells are corn, it’s a no brainer. Though ordering or dining out on tacos a few times a week does add up.

Homemade tacos for me generally means ground beef, topped with cheese, veggies,  sour cream and guac. But I’ve been looking for new ways to replicate those amazing street tacos I’ve been indulging on while out. Carnitas, chorizo, chicken mole–you know, creative tacos. My only other attempt with creative tacos was fish tacos…fried fish tacos. Obviously, that’s not going to work anymore. So this time I went with braised pork and tried to tailor it to the fall flavors.  Pork braised in hard cider plus a “salsa” of cinnamon dusted butternut squash helped bring out a sweet-savory combination. This recipe only requires a bit of squash so it’s prefect to use up some leftovers you have hanging around.

In a small Dutch oven, heat canola oil until very hot. Brown meat well on all sides, about 5 minutes per side. Remove from pan and set aside. Reduce heat to medium and add onion, garlic and hot peppers to pan and sauté until onions begin to soften, about 4 minutes. Add hard cider to pan, scrapping up any brown bits. Stir in cinnamon and allspice. Add chopped tomatoes and bring to a boil. Return pork to the Dutch oven, reduce heat, cover and simmer for 1 1/2 to 2 hours, until pork is very tender. 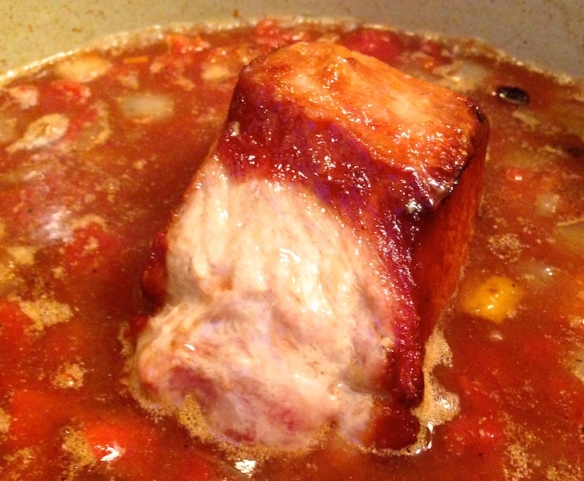 While pork is cooking, toss red onion, cider vinegar, lime juice, sugar and sea salt together in a medium bowl. Stir so onion slices are well coated, then let stand at room temperature until ready to serve.

Preheat oven to 450°F. In a small bowl, toss butternut squash, olive oil and cinnamon. Spread onto a baking dish, leaving lots of space, and roast for 30 minutes.

Remove pork from Dutch oven and shred with two forks. If pork looks too dry, add a bit of the braising liquid. You want it to be moist, not soupy. Warm tortilla shells on a dry, hot skillet, flipped once or twice to evenly heat. To assemble tacos, stack two tortilla shells and fill with 2 tablespoons of shredded pork. Top with roasted butternut squash, pickled onions, sour cream and pepper jack cheese.