You really can make anything in the crockpot. While I tend to stick mostly to dinner foods but have come across recipes for oatmeal, bread puddings, even cakes! Personally, I’d cook everything in a crockpot if I could, but I do understand not everyone is as into the idea. One woman said her kids referred to it as “mushy food”. If you want the sharp snap of a carrot that goes along with vegetable stir-fry, a crockpot may not be your best friend. But for warm, comforting stew or chili, or a faster, easy way to make BBQ Brisket or Pulled Pork, welcome to my little corner of the kitchen.

I first learned about crockpot chicken wings from my friend. She would dump the meat in, usually frozen, add some hot sauce, butter and forget about the whole thing until dinner time. As fantastically easy as that sounds, I generally opt for a little more effort when I slow cook. To avoid overly mushy recipes, I find searing meat essential. Though be warned, searing keeps the meat juicy and adds a bit of a texture, but these are not your typical pub grub hot wings. The braise still takes away the crisp, crunchy skin we all look forward. On the other hand, they are easier to eat with the meat practically falling off the bones. I bought whole chicken wings and didn’t think to cut them apart, so these are big suckers but all the more tasty.

I wanted to keep the chicken wings fairly healthy (the recipe already adds some butter back in) and wasn’t really in the mood to braise a dozen wings. Instead I browned them in the broiler for 5 minute intervals until crisp looking. Then I simply whipped up a sauce, dumped the wings into the crockpot and covered them with hot sauce. Feel free to substitute BBQ sauce or glaze with chutney or jam to make your wings your own.

Pat wings dry with a paper towel and spread on a baking sheet. Broil, turning wings ever 3 minutes until browned and crisp looking, about  12-15 minutes total.

Meanwhile melt butter in small saucepan. Whisk in hot sauce and bring to a low boil. 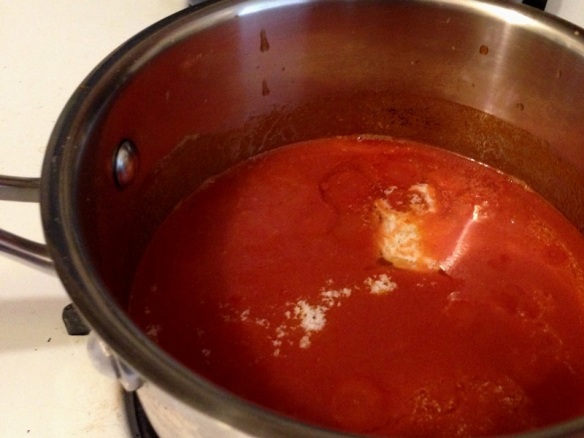 Place wings in the crockpot, so they’re slightly overlapping and packed tightly. Cover wings with sauce, using a basting brush to make sure all wings have some sauce on them. Cook wings on low for 4 hours. Serve with celery slices and a generous dollop of blue cheese dressing. 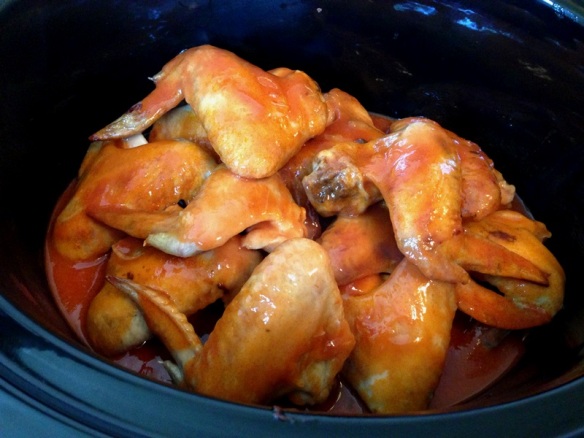