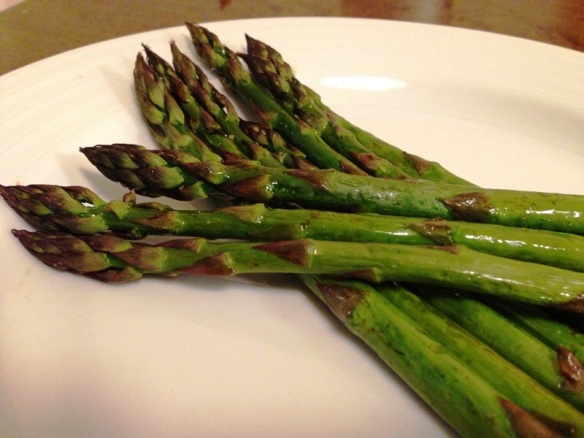 It just isn’t spring without asparagus. I slept in a little last Saturday. I knew I had to get to the greenmarket early to guarantee the freshest produce, but with the weather being extra soggy, I figured an extra hour wouldn’t really matter. Boy was I wrong. Note to self: Greenmarket shoppers are hardcore. Rain, sleet, snow or torrential downpour. They’ll be there, especially during the early weeks of spring where a bunch of green asparagus or rosy red rhubarb is like a blinding ray of sunshine among an otherwise grey day. So if you want the good stuff, you better be there bright and early too.

I was disappointed to find my extra hour of sleep cost me some precious rhubarb at Grand Army Plaza (I was later able to claim the last 10 stalks left in all of NYC at Union Square), but excited to see there was still plenty of asparagus to go around. My husband admitted to me that it was probably his least favorite vegetable. While others pine for the slender green stalks in early spring, he can take it or leave it. I wouldn’t consider myself an asparagus fiend. I won’t buy it out of season; it’s just too expensive and tasteless. And it’s not a vegetable I particularly crave. But somehow, when spring comes around, I jump on the bandwagon with everyone else. For me, I think it’s more about what it stands for, the winter finally behind us and summer straight ahead, than a matter of taste.

Rummaging through my cookbooks, I discovered a new recipe. Brown butter balsamic roasted asparagus. Butter, balsamic vinegar and soy sauce enveloping tender roasted stalks of asparagus. How could such a thing possibly be less than perfect. I was all prepared to serve it for Mother’s Day dinner. A simple side dish with so few ingredients, I never planned a test run, but I found myself with some fresh asparagus a few days earlier and figured, why not. I’m not really sure what went wrong, but the results were awful. The acid level was off and the rich buttery flavor transformed to cheap movie theater “butter”. It was such a simple recipe with only a few ingredients, but somehow still too many. With no intentions of abandoning my asparagus plans, I decided to simplify the recipe even further. The roasted asparagus remained the same but drizzled only with a simple balsamic reduction. Considering it was the only dish we finished among the sea of oversized portions on Mother’s Day, I’d say the recipe was a full success.

In a small saucepan heat the balsamic vinegar over medium heat, slowly bringing it to a boil. Reduce heat and simmer until vinegar has reduced by at least half (more so if you prefer a thicker syrup), about 10 minutes. Let sauce cool completely. This can be done a day or two in advance and stored in the fridge. Just remember to bring the syrup to room temperature before serving.

Preheat oven to 450°F. Spread asparagus on a rimmed baking sheet. Generously brush with olive oil and sprinkle with salt and pepper. Roast asparagus for 10 minutes until slightly browned and softened. 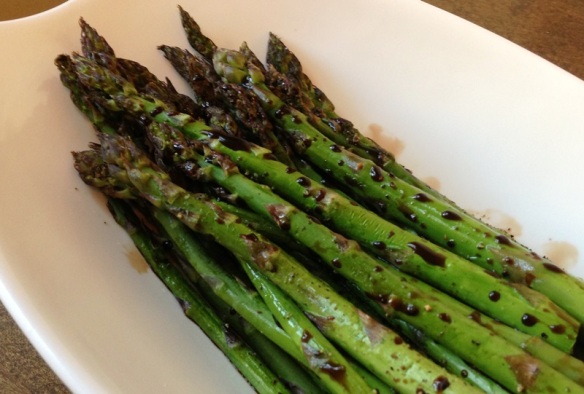 Arrange asparagus on a serving plate. Drizzle with balsamic reduction and serve immediately.