My knowledge of foraging was pretty much nonexistent. Sure, I knew there were some types of wild mushrooms you could collect and eat. I also knew some types might kill you, so I never really tested the idea. I knew violets were edible and used to pick them in my backyard as a kid and dip them in sugar or honey. I knew dandelion leaves were tasty, but bitter, and mixed well with other lettuces in a salad. Okay, so maybe I did know a few things, but nothing like the world Leda Meredith, urban forager, opened up for me.

It was a chilly Saturday in early April. I’ve been following Leda (don’t you love how after meeting her once I assume we’re on a first name basis?) for a while now, on Facebook and Twitter, drooling over her recipes and beautiful photography. I was familiar with her foraging tours, but as frequent as they are (every few weeks between early Spring and late Fall), there was always some conflict. When a tour popped onto the calendar the first weekend in April I was excited to find my schedule free but also a bit disappointed because it was so early in the year. I expected to wander around Prospect Park and identify where things would be. You know, a few months from now, when Spring really starts. “This is where the mulberry trees are, come back in May. Or look, here’s a sassafras tree. You can’t actually do anything with it until June.” Boy was I wrong. I took so many notes on what was already in bloom and could be consumed right now, my hand hurt as I scrambled to keep up. Luckily, my husband joined me (and he was excited to join me in foraging!) and helped document via iPhone.

I was in awe of Leda’s wild plant filled brain. She credited her knowledge and incredible memory skills to the relationship she developed with the food. “Once you forage for something, cook and eat it, you have a connection between eating it and where you found it.” We spent the afternoon identifying and silly me didn’t bring a bag with me to collect any plants. I found that while I could probably remember their locations in Prospect Park, when I found myself faced with plants that looked familiar in another park, I wasn’t nearly as certain. It will take a few more foraging trips with Leda over the season for me to grow more confident in my own foraging skills.

From this trip I took away some plants that I was already aware of, discovering (so many!) new uses for them and a few new easily identifiable plants. 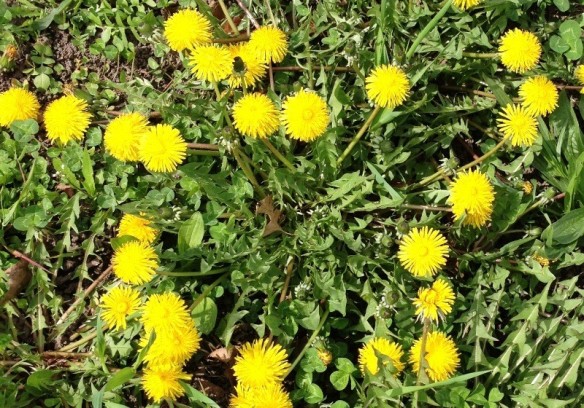 While I knew dandelion leaves were a tasty addition to a salad, I wasn’t aware of their nearly endless list of other uses. The greens should be eaten early, before the flowers bud or then they become too bitter. Use dandelion flowers to make wine, fritters or tea. Use the roots to treat an upset stomach or liver problems. Leda noted it was her “trapped on an island” plant and the only part of the plant she didn’t have a use for was the seed heads (when they become white and fuzzy). Someone on the tour noted that if you’re trapped on an island, it makes for pretty good entertainment. Dandelions can be identified by their low-to-the-ground rosette formation, jagged toothy edges, leafless flower stalks and bright yellow buds.

When I was a kid, I don’t think that I played house the way most kids did. My version was more of a Little House on the Prairie meets Boxcar Children, trapped in the woods and needed to survive on our own. I used to pick field garlic all the time, not knowing it was edible, but knowing it was a better option to the crabgrass that would cut up my hands. Field garlic looks like stems of chives and can be used in similar ways. The bigger and thicker the stalk is, the bigger the bulb. For larger stalks, skip the leaf, dig up the bulb and use it as you would a regular garlic clove. To make sure you have the right plant, make sure it smells like garlic. If there’s no smell, stay away!

Lesser Celandine (which my friend and I have affectionately nicknamed “Lester” because it’s a bit of a mouthful to say) is part of the buttercup family with glossy yellow 8-10 petal buds and sort of lop-sided heart leaves. They grow low to the ground and need to be harvested quickly. Lesser Celandine will pop up in early spring, but once they bloom, they will be gone without a trace until next year. Although a few leaves can be eaten raw in salads, in larger quantities they must be cooked to be safe. The tubers (roots), once cooked, are also edible, but DON’T eat their pretty yet POISONOUS flowers. It is a new invasive plant, as I clearly saw during my weekend in Baltimore. Literally fields of lesser celandine. The other plants didn’t even stand a chance.

The biggest piece of foraging advice Leda gave that really resonated with me was that any plant that smells like garlic is edible. Um, if you’ve read even a sliver of my blog to date, you probably understand why I picked up on that more than anything else.

Leda Meredith is the author of The Locavore’s Handbook: The Busy Person’s Guild to Eating Local on a Budget. She runs frequent foraging trips in Prospect Park, Brooklyn as well as other parks throughout the boroughs.  Leda often partners with local restaurants where you forage for plants, then enjoy a meal prepared by the restaurant with them. I’m particularly excited about the May 5th trip with Slow Food NYC and Flatbush Farms.  For Leda’s complete foraging and workshop schedule, visit her website or keep up with her via Facebook or Twitter. Leda recommends participating in a foraging tour every 6 weeks for the most complete understanding of edible plants. After 6 weeks what you saw the prior month will be gone and new edible plants will have taken their place.

16 thoughts on “A New Look at Local Food: Urban Foraging”