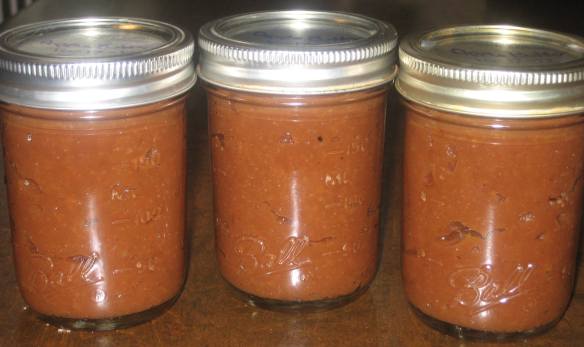 After seeing how easy Cranberry Butter was to make, I was ready for apple butter. Apple butter is basically apple sauce, cooked down until its thick and spreadable. One method of cooking it down is using a dutch oven, on the stove over very low heat for a couple of hours. And I mean very low heat, plus frequent stirring if you don’t want it to burn. Did I also mention the apples bubble a lot and pop, throwing scalding apple goo onto you and causing painful burns (I have the scars to prove it). So much work! Then I learned about the crockpot method.

I’m a huge fan of crockpot dinners. Throw a bunch of ingredients into the pot, set it on low for 8-12 hours, then come home to an amazingly smelling home and some great food. But I never thought of it as a tool I could use for canning. Rather than facing potential scorched pots, ruined butter and searing pain, you can reduce your apple butter in a crockpot worry free! A lot of recipes said to cook the butter for 8-10 hours on low, but I found low to be too low. Instead I kept it on high for about 6 hours, still no scorching or burning! The trick is, you keep the crockpot open, or at least partially open so the steam can escape and the mixture reduce.

Rather than starting from scratch making the butter, I reserved a few quarts of applesauce I made the day before. Rather than canning this sauce, I stored it in the fridge overnight, then stuck it in the crockpot the next day. Of course, there’s nothing wrong with starting right from the apples, I was just on a bit of a apple sauce marathon the day before and couldn’t bare another day of dealing with my food mill. One day and I wanted the mess gone. Unlike my applesauce, that I keep plain, I did add a little sugar and spice to the butter. I was afraid the butter would get too bitter after being cooked down so wanted just a hit of sweetness and some fall spices.

Pour applesauce into crockpot. Add sugar and spices and blend well. Cover crockpot and cook over high heat. Once sauce starts to boil, shift lid so it is covering crockpot halfway with room to let steam out. Alternatively, remove the top and use a splatter screen (apple sauce will still bubble a bit). Keep it cooking on high for about 6-8 hours. The butter will gradually turn to a dark, almost mahogany brown color. Butter is done when it has thickened to a spreadable consistency. If sauce does start to bubble too much or burn (VERY unlikely) reduce to low heat and continue cooking.

Spoon mixture into clean, hot half pint jars leaving 1/4 inch headspace. Process in boiling water bath for 15 minutes. If you’re not in the mood for canning, the butter can also be frozen in small plastic containers. When ready to use, just defrost and spread on your favorite food surface.

7 thoughts on “My Adventures in Fruit Butter: Apple Butter”