Last week I made some delicious peach lavender jam. As I mentioned before, I love peaches but I’m not too keen on peach flavors. So I wasn’t too sure about the jam, until it mentioned how tasty it was as a cake filling, like the recipe they shared on the next page. Now of course, I immediately thought cupcake. So here it is, another long awaited cupcake recipe.

Preheat oven to 350°F. Line muffin pan with 12 cupcake liners. In a small bowl mix flour, baking powder and salt. Cream butter and sugar in standing mixer until fluffy. Add eggs one at a time until well blended. Alternate adding flour mixture and milk  until the mixture is combined.

Fill cupcake cups 2/3 full. Rap cupcake pan on the counter  several times to remove any air bubbles. Bake for 20 minutes or until a toothpick inserted in the center comes out clean. Allow cupcakes to completely cool.

Using a 1 inch round cookie cutter, or sharp knife, cut out the center of each cupcake. Save round cupcake bit!

Fill hole with about 1 tablespoon jam. 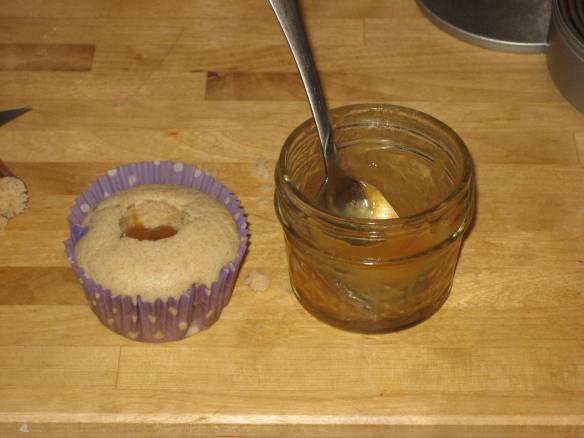 Cut off the lower part of the round cupcake bit and cover cupcake whole (you can eat what you cut off!). Repeat on all cupcakes. 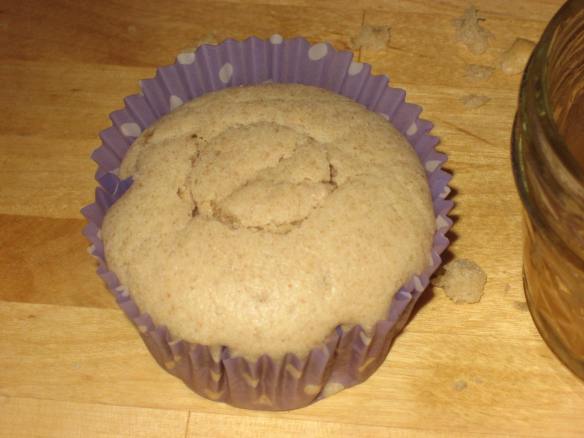 Place egg whites, sugar and salt in a medium heatproof mixing bowl over a pan of simmering water and whisk gently and consistently until the egg whites are hot and sugar dissolved (about 3-4 minutes). Remove from heat and beat egg whites with a mixer until thick (about 5 minutes). Gradually beat in butter and continue beating until buttercream is spreadable. Scrape the vanilla seeds into the mixture and beat two minutes more. If icing remains too soft, refrigerate until it thickens. Be sure to mix icing with a whisk before using.

A final look at the filling. Yum!

7 thoughts on “Everything’s Better as a Cupcake!”