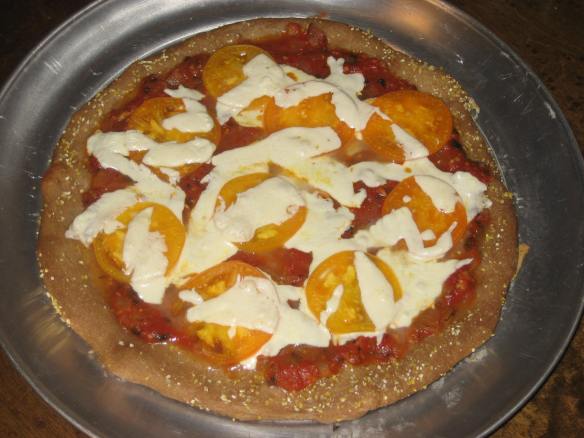 I don’t know what it is, but Friday nights are pretty synonymous with Pizza for me. I’m all about going out on Saturdays but after a long day and week of work, I would much rather spend my Friday nights in my pajamas, on the couch, with a movie and some pizza. Living in Brooklyn, I’m pretty lucky to have great pizza. Pretty much every place you stop at claims to have the best pizza in New York City. Take out pizza is great, but it’s also really easy to make it yourself too!

When I make pizza dough, I make a lot. It takes a bit more effort at first, but it’s really easy to freeze and save for another Friday night. In fact, I actually find the dough is easier to work with after once frozen!  Since there’s only two of us, I make smaller pizzas. Once batch makes a ball of dough large enough to split into two 12″ pizzas. So doubling the recipe, I get 4 balls of dough and pizza for at least a month (I don’t have it every Friday).

Combine yeast and warm water in a large mixing bowl or the bowl of a heavy-duty mixer (fitted with dough hook) and let stand until the yeast is dissolved, about 5 minutes.In a separate bowl, combine flour, olive oil, salt and sugar. Add to yeast and water mix.

Gradually add flour and continue to mix on low speed until the dough is smooth and elastic. Transfer the dough to a bowl lightly coated with olive oil and turn it over once to coat with oil. Cover with a dish towel and let rise in a warm place until double in size (about 1 hour).

Punch the dough down and divide it in half. Roll each piece into a ball and let it rest, loosely covered with plastic wrap, for 10 to 15 minutes. Preheat oven to 475°F. Lightly grease two pizza or baking sheets with olive oil and dust with cornmeal.Prepare desired toppings.

Flatten each ball of dough 1 at a time on a lightly floured work surface into a 12-inch round, rolling and stretching the dough. Place each dough circle on a prepared baking sheet. To prevent soggy dough, brush dough with olive oil and prebake for about 5-7 minutes, until becomes a little brown.

Remove pizza dough from oven and continue topping as desired.This time I went with a bit of homemade tomato sauce, fresh mozzarella and local heirloom tomatoes. Other favorites include arugula, greek olives and feta or spinach and mushroom.

Bake until the crust is browned and the cheese is melted. About 10-12 minutes. Remove from the oven, slice and enjoy!

IF FREEZING PIZZA DOUGH: Wrap balls of dough tightly in plastic wrap and store in freezer for no more than 6 months. To defrost, take dough out of freezer at least 24 hours before you plan on making pizza and defrost in refrigerator. Take dough out of fridge and let sit at room temperature for 1 hour. Prepare dough and pizza as instructed above.

4 thoughts on “Pizza Anyone?”