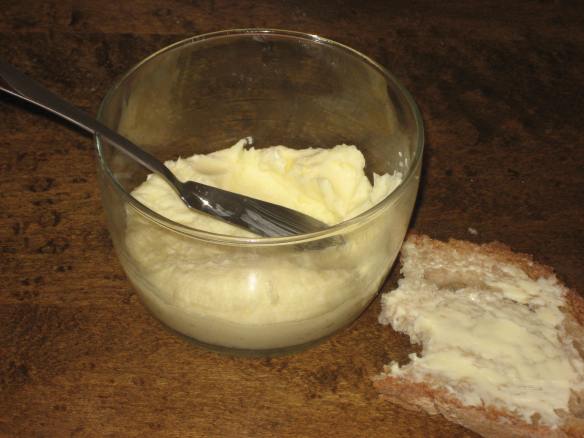 Last time I was at the store, I did my math wrong. I was planning on making ice cream, which called for 2 cups of heavy cream. Somehow I decided a quart was 2 cups rather than 4. So here I am, with two extra cups of cream. Unless I’m doing some heavy duty baking, cream is not something I use very often. I didn’t want it to go bad, so I figured, let’s make some butter!

If you own a standing mixer, you can pretty much do anything. But one thing you MUST try is making your own butter. All you need is heavy cream, a bit of salt and your trusty KitchenAid Mixer. It tastes great and is so easy. Imagine at your next dinner party serving dinner rolls with your OWN butter. People will be impressed.

In your standing mixer, pour 2 cups butter and 2 tsp salt. Fit it with a wire whip and you’re ready to go. I HIGHLY suggest using the splatter shield. The first time I made butter, I also managed to make a huge mess.

Start the mixer on medium speed and gradually whip until it becomes whipped cream. Continue whipping gradually increasing the speed until you’re on high. During the process, stop the mixer every once in a while to scrape the sides with a plastic spatula. 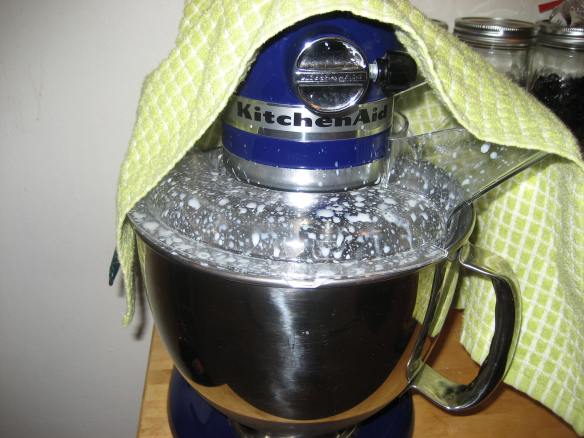 Protection is ESSENTIAL to prevent splatter

As you see the mixture getting very thick and almost curd like, cover the mixer with a dish towel to prevent extra splatter. Very quickly the butter curds and whey will separate, leading to lots of splatter potential.

When whey separates, detach the wire whip. Most of your butter curds should be stuck to it. Pull curds off with your hand and squeeze gently to remove extra whey. Once the you start handling the butter, you want to move quickly so it doesn’t get too warm and melty. Pull all curds into a ball and squeeze in a piece of cheesecloth to remove any extra moisture. Put in a sealed container and refrigerate until ready to use. The entire process takes less than 10 minutes and you’ve just made your OWN butter! 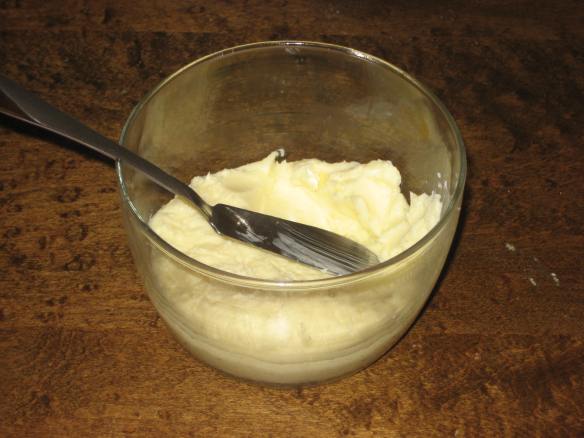 One thing that is important to note is making butter is not cheap, especially if you’re using local, pastured cream. A pint of cream will produce probably about 6oz of butter. So it’s more of a special occasion project rather than an every day one. But trust me, it’s something that will impress.

1 thought on “Fresh Butter in Minutes”