So I might have gone a little crazy last week. One of the items I got from my Tribeca CSA share was half a pound of string beans. A decent sized portion for a dinner side, BUT I split my share with a coworker, so I only get HALF. a quarter pound of beans, minus the few I might have eaten on the way home, doesn’t amount to much. 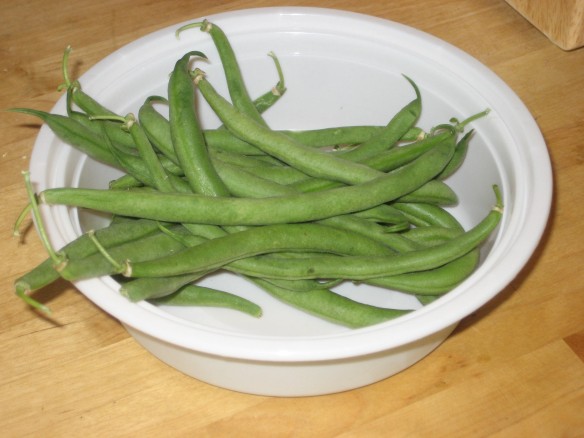 This is what I brought home from my CSA

I happened to be at the Borough Hall Greenmarket on Thursday, where they were selling gorgeous beans for only $2.50 a pound. I bought a bit to supplement my CSA share. Well, maybe a I bought a lot.

And this is what I brought home from the Market. Objects may appear SMALLER than actual size.

They were just so tasty and inviting. When I got them home, I realized it was far more than I and my husband could ever eat, probably in a month. So it came to me…DILLY BEANS! I love traditional pickles, but pretty much anything pickled (or just doused in vinegar) holds a special place in my heart. I think it comes from living too many years with my college roommate. Her idea of salad was lettuce, a drizzle of oil and a lot of vinegar and salt. She was also known for eating gallon jars of pickles in a single sitting (I might have helped…).

The hardest part of making dilly beans is cutting or breaking the ends off all the beans. If you can enlist a husband (reason for marriage) or child to do that, you’re golden. After it’s a matter of stuffing your beans and pickling spices into jars and filling the jars with a hot simple vinegar and salt brine. Then process, store and eat. Or don’t process and just keep them in the fridge for a few days to let the brine soak in before eating. This recipe comes from my absolute canning book (yes, I have a lot of them), Canning for a New Generation.

Fair warning, if you make the recipe as directed (with the chili peppers, but omitting the optional pepper flakes), they’re pretty damn spicy. Plus, the longer they sit in the brine, the spicier they get. I learned this when we opened a jar from last year that was sitting in the pantry for about 9 months. I can’t take spice, but my husband loves it. This year, I made SPICY dilly beans adding the chili peppers AND pepper flakes for my husband and mild ones (no pepper whatsoever) for myself. It’s very important to compromise in marriage. 🙂

In large nonreactive pot, bring vinegar, water and salt to a boil, just until salt dissolves. Reduce to simmer. In hot canning jars, work quickly to put sprig(s) of dill, clove of garlic, dried chilies and pepper flakes (if using) in each jar. Tightly pack beans into each jar, standing them upright. Ladle into each jar hot vinegar mixture, leaving 1/4″ headspace at top. Remove any air bubbles with a chopstick or handle of wooden spoon.

Process jars for 10 minutes. After processed, remove and let sit for 12 hours undisturbed. After 1 hour, check that the lids have sealed by pressing down on the center of each. If the lid can be pushed down, the jar hasn’t sealed and should be refrigerated immediately. After 12 hour rest period, label sealed jars and store.

Dilly beans, like other canned goods should be stored up to 1 year, but remember if you added chili peppers or flakes, the longer the jars sit, the spicier they’ll get!